A Philadelphia Story muses on a 1980s crime: a female lawyer raped and left for dead. The narrative unfolds against subterranean tunnels, mirroring darkness from the past. Historic photos include a suspicious fire in a building with artist’s lofts. Even as legalities were skirted, underworld arsonists espoused a code. My artist friends were told to leave their lofts, by the specific date when the fire occurred, and take anything they cared about with them. My conflicted voiceover colors such folks as people. I was privileged by not having to voice my opinion out loud; while becoming aware of my real thoughts. This scenario was the Noir archetype of “belonging and betrayal”. Played out, it defines where one stands. The victim, was ignored, then found by construction workers, so I included footage of workers. A shot stands in for her: legs of plaster statues seen inside a cabinet. She was permanently damaged. Her world is now that of a shut-in: the legs disappear behind a window. Morning glory flowers in Victorian funerary sculpture symbolize love and sorrow. I include them, to indicate this feeling. With sexual harassment in the fore, rape still lives. --- http://liliwhite.com/moving-pictures/short-essay-films/
Saturday 02.July 20:00
Directors Block 2 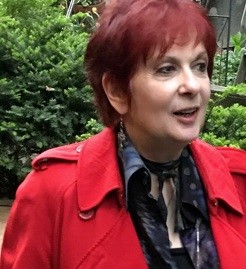 Since 1978 Lili White (http://liliwhite.com) has been exploring collective memory, history, origins of energy, and the primacy of dream states, through her painting, sculpture, and over 100 moving image works. A graduate of the Pennsylvania Academy of Fine Art four-year studio study in painting; and has a BFA from the University of Pennsylvania; she staged three fully realized, multi-media theatrical works, incorporating poetry, dance, music, video and theatrical acting, in Philadelphia Pennsylvania in the early 1990’s, before re-locating to NYC. There she expanded her experimental film-making via new computer editing programs with video. A feature essay film, Fool’s Gold: California Roadtrip in an Election Year, a portrayal of American “greed,” received a NY State Council Finishing Funds Award. It screened at the NYPublic Library’s MEET the MAKER Series. Another, NY(see), screened at 2 Boots Pioneer Theatre and an excerpt was presented in 2007, at the River to River Movie Nite; curated by Tal Yarden. From 2012-15 she was an elected Board Member for MillenniumFilm Workshop; whose archive was sold to NYC’s Museum of Modern Art.